"Tengger People" documented and captured The Tenggerese or Tengger people as they are, in their very own skin and environment. Tenggerese are an ethnic minority in eastern Java who claim to be the descendants of the Majapahit princes. Majapahit itself is was a vast archipelago empire based on the island of Java (modern-day Indonesia) from 1293 to around 1500. Majapahit reached its peak of glory during the era of Hayam Wuruk, whose reign from 1350 to 1389 was marked by conquest which extended through Southeast Asia. "Tengger", the name comes from the legend of Roro Tengger Anteng and Joko Seger is believed to be the origin of the name of the Tengger, namely "Teng" Roro name suffix An-"teng" and "ger" suffix the name of Joko Se-"ger". For the tribe of Tengger, Gunung Brahma (Bromo) believed to be a sacred mountain. Their population of roughly 90,000 is centered in thirty villages in the isolated Tengger mountains (Mount Bromo) within the Bromo Tengger Semeru National Park in Eastern Java. The Tenggerese are considered an ethnic sub-group of the Javanese people. The Tenggerese are basically either agriculturalists or nomadic herders. The agriculturalists generally live on the lower altitudes, while the nomads live on the higher altitudes, riding on small horses. Regarding that Bromo Mountain is the most attractive Mountain that visited by worldwide tourist, it makes Tenggerese find the opportunities to make a living by guiding, renting a horse, selling merchandise or selling food in stalls around Bromo Mountain. This is my personal sentiment towards Tengger People of Mount Bromo. 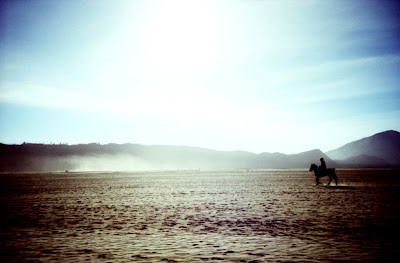 Horseman in the horizon.
Horseman ride across the mountain’s famous ‘sand sea’,  These horseman considered it as a daily occupation.To get to the peak of Mount Bromo itself, one can either walk or take a horse ride to the staircase of the mountain. Horse rides are operated by local Tenggerese.The Tenggerese are basically either agriculturalists or nomadic herders. The nomads live on the higher altitudes, riding on small horses. Regarding that Bromo Mountain is the most attractive Mountain that visited by worldwide tourist, it makes Tenggerese find the opportunities to make a living by guiding, renting a horse around Bromo Mountain. 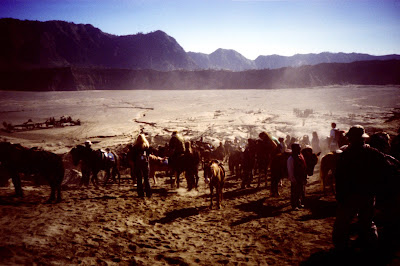 Tourists, Tenggerese and Horses.
These horsemen offer tourists a horse ride to the peak of Mount Bromo with a price of Rp 45.000 (Less than $5). Horse rides are operated by local Tenggerese. 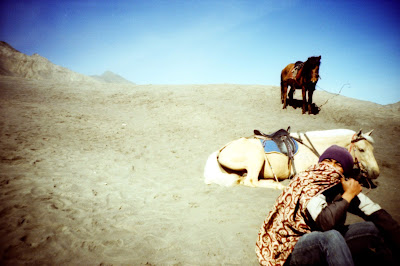 Tenggerese and their horses.
Bromo is actually just one crater in the vast, 800 km2 Tengger massif, which forms the largest of East Java’s five main volcanic ranges. Although by no means the highest mountain in the region (2392m), it has gained its reputation partly because of its unique location and partly through the reverence shown to it by the local inhabitants, Tengger Tribe. 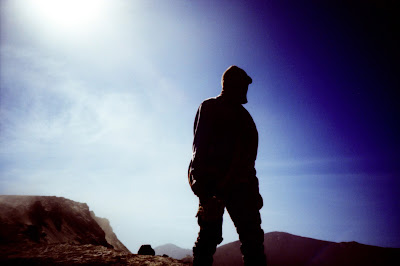 Standing Tall.
One Tenggerese standing tall during a breezy morning in Mount Bromo. 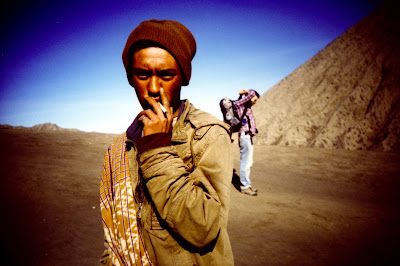 Tomtom the Tenggerese.
I saw many horses and Mount Bromo’s local people who ride them. So when I walk, I stumbled upon this lad, all looking bold, a striking figure. He offers me to ride a horse because he said that walking to Mount Bromo is  so tiring but instead accepting his offer, I decided to talk to him " How about I shot you?" then he asked several questions. So after we agree on some terms,I shot him. After shooting him, I asked him.. “what is your name?”, he replied “Tomtom” 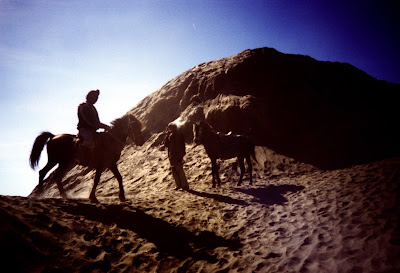 Tenggerese Horsemen.
Horse rides are operated by local Tenggerese. Will take tourist from the sea of sand to the staircase of Mount Bromo. 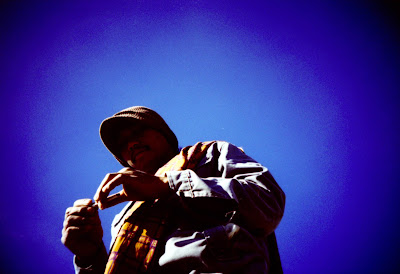 The Guardian in Mount Bromo.
Tenggerese  is one of Indonesian tribes that live around Bromo Mountain. Tenggerese is an very humble people. The name Tengger is believed taken from the name of the ancestor, who was Roro Anteng and Joko Seger. The Tenggerese are the descendants of the Majapahit Princes. Their population is about 600.000 inhabitants within thirty villages. Tenggerese are being known as obedient Hindu followers. For them, Bromo Mountain is sacred. 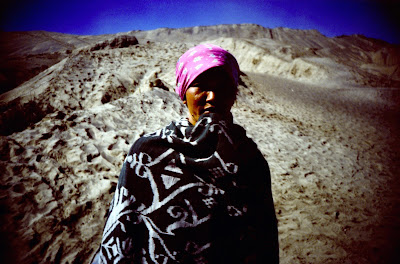